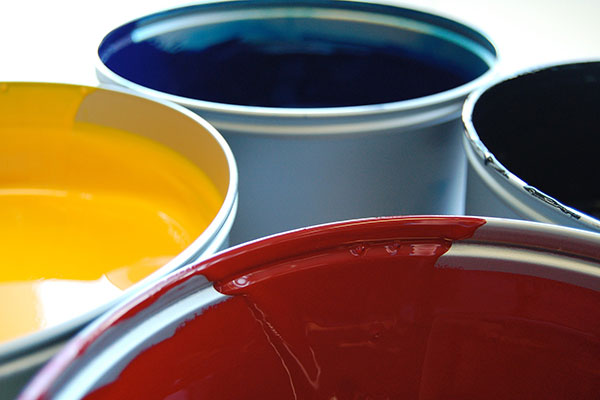 Lithographic fade-resistant printing inks, by industry standard, will hold color for up to three months of exposure to sunlight. The measure of this standard is eight hours per day of direct sunlight exposure in a midwestern sun. Gans Ink Company uses an Atlas Suntest xenon-lamp fadeometer to test printed samples. Ninety-six continuous hours of fadeometer testing is equal to roughly twenty-four days of direct sunlight or nearly three months exposure at eight hours per day.This equipment is well accepted as a standard in the industry for its accuracy in testing the fade of inks on a given substrate.

In the manufacturing of PANTONE* colors for resistance to sunlight, the use of fade-resistant type pigments are used. For example, for PANTONE Warm Red, a yellow-shade Wachtung (2-B) red can be used to achieve the desired shade or a yellow-shade Napthol red may be even more attractive in certain situations. These pigments have been found to be quite acceptable, especially in high pigment percentages. In most colors, the higher level of pigment load means better resistance to sunlight. For this reason it is safe to say that PANTONE 179FR would hold up better than PANTONE 176FR.

As we examine particular pigments, such as those found in the shades of process blue (Phthalo blue), Pantone green (Phthalo green) and black (Carbon black), we find excellent resistance to the ultra violet rays of the sun in both lower and higher pigment percentages.

We do encounter some difficulty achieving fade-resistance and exactness of shade in certain colors. This is due to the lack of available color equivalents for Rhodamine Red (Yellow and Blue Shade) that are both fade-resistant and as clean as needed for the many Pantone colors that contain this pigment. An even greater allowance must be made for Blue Shade Rhodamine, such as that used in Pantone Purple.

The cost effect of fade-resistant pigments can be quite high. In the case of the fade-resistant reds and purples, we see the highest cost factors. Therefore, when specifying fade-resistance as an ink requirement, one should expect increased cost for inks. We cannot guarantee any inks for a period of greater than three months of sunlight exposure. Because we have no control over the many printing variables we cannot make guarantees even for shorter times of exposure to sunlight.

The following categories denote the sun fast (fade-resistant) characteristics of colors as they appeared a recent edition of the PANTONE Matching System Formula Guide. In most cases, improvements in fade resistance can be achieved.

PANTONE ® is the property of Pantone, Inc.